The Inbetweeners Wiki
Register
Don't have an account?
Sign In
Advertisement
in: Characters, Main Characters, Female Characters,
and 3 more

Emily Head
Carli D'Amato (born October 11, 1991) is a fictional character from the E4 coming-of-age British sitcom The Inbetweeners. Portrayed by Emily Head, she made her first appearance during the pilot episode "First Day", broadcast on 1 May 2008. She appears throughout the series, as well as appearing in the follow-up films The Inbetweeners Movie.

Carli is Simon's main love interest. She demonstrates a good deal of influence over her peers, including school bullies. She and Simon have been friends since the age of eight, and this likely accounts for Simon being able to approach a girl in such a different social circle. Generally, Carli is quite shallow and has little romantic interest in Simon but uses his obvious infatuation to her own advantage.

Carli has little romantic interest in Simon but uses his obvious infatuation to her own advantage even encouraging Simon to study a subject he is not doing at school purely to assist in her own revision. This will damage Simon's chances of passing his own exams but he is evidently happier to assist informing Will that he "can always re-sit". Simon is quite stricken and thinking about her and trying to be near her occupies much of his time. He commits several embarrassing faux pas while pursuing her including declaring his love in a huge painted love-heart on her parent's driveway, being drunk and vomiting profusely over Carli's kitchen and younger brother and sneaking into her house at night. This latter causing upset between the two families with Simon's own father thinking Simon might be harbouring paedophile tendencies towards her little brother (he mistook the room for Carli's) and her father telephoning Simon to inform him that if he goes near their house again, he's "gonna fuck [him] up" - a message conveyed to a vomiting, hung-over Simon by his father.

Carli is generally friendly towards Simon much of the time but this is purely platonic. She is often accompanied by friends (particularly Rachael) when Simon interacts with her and due to Simon's infatuation, he usually makes a complete idiot of himself. Her friends are often seen ridiculing Simon in front of her and question her judgement in having anything to do with him. In the first episode, Carli engages Simon in conversation and as she leans forward to smell his aftershave, he glimpses her cleavage and bra through the open neck of her shirt and becomes aroused. Jay immediately latches on to this fact and publicly announces it to the other pupils in the common room leading to him to be given the nickname of "boner".

Carli has a much older boyfriend who owns a car and only when they split up briefly does Simon finally get the intimate moment with her he has dreamed of. Carli crushes Simon later that same day by announcing that she has reconciled with her boyfriend - although early in the movie, it is clear they have started dating again and possibly for some time. Simon states it has contributed to the best year of his life - at which point he is crushed once more as Carli dumps him again. Carli does not appear to be held in such high regard by the other three boys (especially Will and Jay ) and is often referred to in derogatory terms, much to Simon's annoyance. Simon being dumped at the end of school prompts them all to go on a "lad's holiday" so Simon can get over her. They all agree but it ends up being largely overshadowed by Simon's obsessing about Carli which is a major theme throughout the movie. It is not helped by Neil's poor planning which has resulted in them going on holiday to the same place as Carli and Rachael. Even though Simon has been affected by his split with Carli, she seems oblivious and proceeds to use him in one of the closing scenes to make James jealous by kissing him passionately, all the time with her eyes on James to gauge his reaction and muttering to herself "that should do it". While trying to use Simon in further goading, he finally sees his feelings have little value to Carli and decides to leave and meet up with Lucy. The inference is that Carli will no longer figure emotionally in Simon's life (despite them inevitably meeting through family ties) and she has lost her hold over him. Though Carli's surname D'Amato is of Italian origin, she, however, is of full English background.

Carli is popular and attractive, with an older rugby-player boyfriend, making her even more unattainable. Carli has a shallow, manipulative and selfish personality, which Simon is often oblivious to, although his friends are not as fooled. On several occasions, Will, Jay and Neil have openly expressed contempt for her, with Will pointing out that she merely strings him along and states she's an "arsehole", Jay calling her "stuck-up", and Neil stating she's "moany". (Although on one occasion Jay and Neil referred to themselves as "mates of Carli", although this was most likely feigned to unsuccessfully befriend one of her boyfriends.)

Simon Cooper: Simon is oblivious to Carli's shallow, manipulative and selfish personality, although his friends are not as fooled. On several occasions, Will and Jay have openly expressed contempt for her, with Will pointing out that she merely strings him along, and Jay calls her "stuck-up." She throws Simon small bits of affection to keep his hopes up in her. In "Exam Time", she asks if she can study for exams at his house, and when there, mentions she has broken up with her boyfriend; when she notices Simon trying to impress her, she uses the opportunity to get him to help tutor her for another subject that he is not even taking himself. Simon eventually gets his intimate moment with her after helping Carli study, with the latter kissing him twice on the lips. He ends up spending the entire revision period studying for her Geography final, so he can continue to tutor her, instead of his own exams. When he later thinks they have a chance at dating, she promptly tells him she is back with Tom. Between the end of the series and the beginning of the film, Simon and Carli have been dating, but she breaks up with him as she wants to be single whilst going on holiday and at uni, obviously having viewed their relationship with a lot less investment than Simon. The boys' attempts to get him over Carli are the catalyst for going on holiday in Malia, although they find once there that Neil had thoughtlessly booked them onto the same holiday as her, which Simon views as a sign he should win her back. He rebuffs the advances of a nice girl named Lucy in his attempts to win Carli back, but she has formed a relationship with James, her cocky holiday rep. At a boat party, she and James fall out and Carli asks Simon to kiss her to make James jealous. Simon eventually realises that Carli is using him for her own ends and breaks up with her for good. Carli is neither seen nor mentioned in the second movie.

Tom: Tom was Carli's boyfriend in Year 12. He's in his early 20s and has his own car, making him hard to compete with. Contrary to older men being more mature, Carli mentions that Tom tends to do disgusting things with his friends that make Simon and his friends look normal. Carli dumps Tom in the Series 2 finale, only to get back with him for unknown reasons. The relationship obviously didn't last, as Tom is never mentioned in Series 3.

James: James was a club rep Carli met in Malia after graduation in the first Inbetweeners movie. He's a bully, harassing Simon and the others on sight. Carli either doesn't seem to notice this or doesn't care because he's good-looking. James ditches Carli to go flirt with other girls. This, along with Simon's rejection, hopefully teaches Carli some humility about boys.

Carli is a recurring character on the show and has appeared in the following episodes; 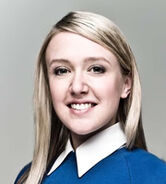 Simon and Carli.
Community content is available under CC-BY-SA unless otherwise noted.
Advertisement