Edit
watch 01:36
We're Getting Mutants in the MCU - The Loop
Do you like this video?
Play Sound

"Big" John Webster (born 28 February 1992) is a recurring character in the first, second and third seasons. He is played by John Seaward and debuts in the series premiere. Big John, as he is known by Jay, Simon, Neil and Will is a new student at Rudge Park Comprehensive. He tries to make friends but has yet to work his special magic on the students at Rudge Park Comprehensive.

He is the most seen out of the group of "freaks," which consists of him, David and Susie. There's clearly something wrong with the lad considering that he had a counselor, and he is extremely overweight. It can also be said that he is rather stupid, as in 'The Field Trip' he is paired up with Will as "he is not good with directions and might get lost". It is also implied that he has poor personal hygiene. This can be justified by the fact that his hair almost always looks untidy and that in the movie when Mr. Gilbert states that he dislikes some pupils for their bad personal hygiene, John is seen smelling his armpit. In Series 2, Episode 1, Will says and I quote, 'The only unspecified carnage we'd witnessed was what Big John had left in the coach toilets.'

Big John is introduced in the first episode of The Inbetweeners, he was a victim of bullying in his previous school and joins Will and the other 'freaks' on their first day, hoping to make a fresh start. Unfortunately for him hopes of a new beginning don't work out well and he often ends up being the butt of peoples jokes.

Despite being socially worse off than the Inbetweeners, John does seem to be on good terms with some of the more 'popular' students. In 'Will's Birthday' John is seen at the party of popular student Louise Graham and appears to have 'pulled' a girl, given that he has his hand on her breast. John is good with the boys as he seen to stand up for Will when he was getting bullied by Mark Donovan once in Xmas Party and Neil when he invited him to his 18th in Will's Dilemma. However Jay is shown to to antagonize John the most as he compares his social status to him when doing the fashion show and being left out of the catwalk, another time he was shown to be hostile and mean was when John was interrupting the planning for Xmas Party, when Jay stole his beer for another girl and himself, Jay saying "I'm is not sitting next to John as his fat arse takes up two seats", also when he was invited to Louis's party and the final time when he implied "great it's bring a freak party" when Neil invites John and another student to his 18th thinking he got 10 guests in total but got 8 when Will reminded him. 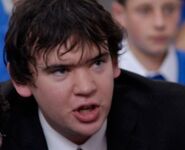 Big John behind Will.

Big John can be seen behind Will McKenzie.
Community content is available under CC-BY-SA unless otherwise noted.
Advertisement